Everyone agrees it’s a problem, but will there be change? 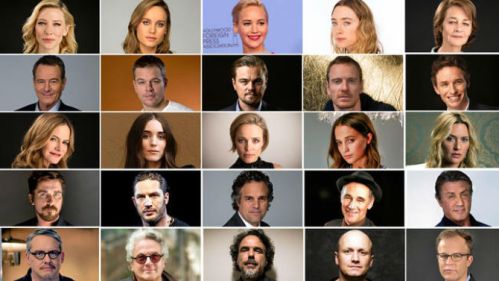 LA Times: The Multi-Ethnic Coalition calls for diversity in Hollywood
“When people do not have their image in front of others, we lose our voice,” said Sonny Skyhawk, founder of American Indians in Film and Television…

…The group cited “whitewashing” by studios, referencing instances in which minority characters were either played by white actors — Emma Stone as an Asian American in “Aloha,” Ben Affleck as an Hispanic in “Argo” — or ethnic roles that were rewritten to accommodate white actors.

The alliance also argued that Hollywood has a tendency to limit roles for actors of color to films about historic or extraordinary figures such as Martin Luther King Jr. or Jackie Robinson, or an “especially dignified slave or maid,” Mayeda said. “It is about how we are perceived by the American public as a whole,” said Alex Nogales, president of the National Hispanic Media Coalition. “If we are absent, we don’t have visibility. If we’re [cast] in a negative way, that’s how we will be treated.”

NY Times: What It’s Really Like to Work in Hollywood* (*If you’re not a straight white man.)
Sam Esmail: Growing up, I [thought] white male was the norm, the default character in every story. I never thought other possibilities could exist.
Ken Jeong: A U.C.L.A. acting professor gave me good marks in my performance and [said]: “You’re a good actor, which is why I’m telling you, stay the hell out of L.A. …
America Ferrera: I was 18 and putting myself on tape for a movie I really wanted. I got that phone call: They cast a Latino male in another role in the film; they’re not looking to cast [a Latina]. So I defiantly bleached my hair blond, painted my face white and made the audition tape. I never heard back. I just remember feeling so powerless. What do you do when someone says, “Your color skin is not what we’re looking for”?

NPR (on Bunche Report): Diversity Sells — But Hollywood Remains Overwhelmingly White, Male
If you want an accurate picture of ethnic and gender diversity in the United States, don’t look to Hollywood. That’s the conclusion of the “2015 Hollywood Diversity Report” conducted by the Ralph J. Bunche Center for African American Studies at UCLA. The report quantifies the striking — if not surprising — racial and gender imbalances in film and television, both behind and in front of the camera, by comparing the representation of minorities to their actual proportions of the population. “At every level, in every arena, women and minorities are under-represented in the industry,” says Darnell Hunt, the study’s co-author and director of the Bunche Center. “And the only question really is how serious, how egregious that level of under-representation is.”

Mother Jones (on Bunche Report): Hollywood’s Lack of Diversity Is Costing It Millions. Here’s Why.
The researchers examined 163 films released in 2014 and found that the films with truly diverse casts (there were only eight) also had the highest median global revenues and returns on investment. The median film among the 55 with mostly lily-white casts grossed less than half as much—and barely broke even..

Huffington Post: Hollywood’s Diversity Problem Starts At The Top, UCLA Report Finds
Time Warner executive director of diversity and corporate social responsibility Jonathan Bean recently spoke to The Hollywood Reporter and agreed that executive attitudes have a major ripple effects in the industry. “I don’t believe it’s malicious,” Beane told THR. “It’s just that people have a better eye for talent when it looks like them and has the same background as them.”

The Guardian: Racial diversity in films has flatlined – Hollywood needs to rewrite the script
In the words of Viola Davis, winner of an Emmy this week: “The only thing that separates a woman of colour from anything else is opportunity.” But a compilation of lines spoken by people of colour in recent successful films showed how seldom non-white characters speak. If you’re a black man, you are allowed to be a rapper, a bouncer, a drug dealer, a convict, a gang member, a rapist or a wife-beater. You can be a noble slave, the normcore best friend, a duplicitous merchant or space-pirate. You also get to die first. If you’re a black or Hispanic woman, you can be a prostitute, a maid, a nanny, a crack addict, a stripper or a dead body. If you’re an east-Asian woman you can be a geisha, a witch, a concubine, a submissive wife, a waitress in your father’s restaurant or a kidnap victim. Middle Eastern men can be terrorists or local peasants, and east-Asian men can be sadistic enforcers with martial arts skills.

Huffington Post: Okay, Straight White Men, Time To Give Someone Else A Turn In Hollywood
Hollywood is so overpowered by straight white men that it feels like a Tea Party convention at a country club in Connecticut. There are more straight, white male superheroes named Chris than women or minorities with powers combined, but the evidence isn’t purely anecdotal. As delightfully delusional as it may be to subscribe to the idea that straight, white men just happened to consistently be the most talented actors, writers, directors and producers available, the fact is that the current state of the industry is the result of a systemic problem built on enduring practices of gendered and racial discrimination. This week provided some hard evidence to corroborate that.
A condemnatory University of Southern California study, cited by the American Civil Liberties Union, found that less than 2 percent of the 100 highest-grossing films from 2013 and 2014 were directed by women. Of the 3,500 episodes of TV released in that time, just 14 percent were directed by women. But perhaps the most telling information comes from the ACLU’s own investigation, which cites a female director who was informed by a potential employer that they had “already hired a woman this season.”

Huffington Post: Ava DuVernay Says Too Many Films Focus On The ‘White, Straight, Male’ Perspective
“I don’t consider it a challenge to say it’s a black film or a Liberian film or a film by a Japanese filmmaker. These are all the nuances. This array, which is what we’re celebrating, is a good thing,” she said, referencing her newly-rebranded distribution company ARRAY. “The bad thing is that there’s not balance. It’s imbalanced. We’re seeing too many films with only one voice, from one dominant white, male, straight gaze … and everything else is lopsided.”
…DuVernay also spoke to the small percentage of black filmmakers whose work actually makes it to the big screen. In fact, one 2013 study found that only 6.5 percent of the directors behind the 100 top-grossing films were black, none of whom were black women.

This entry was posted in Uncategorized. Bookmark the permalink.